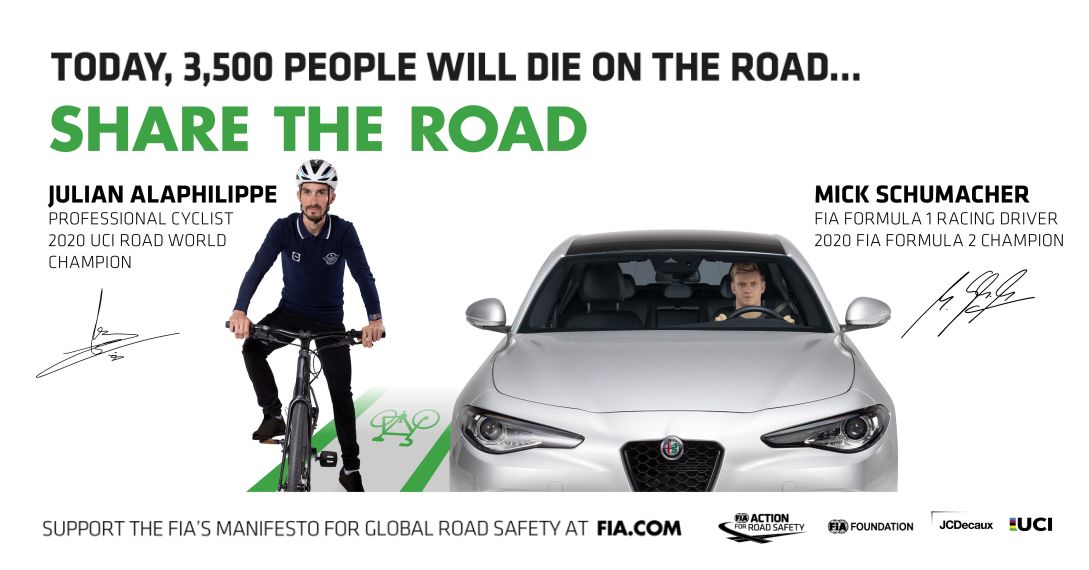 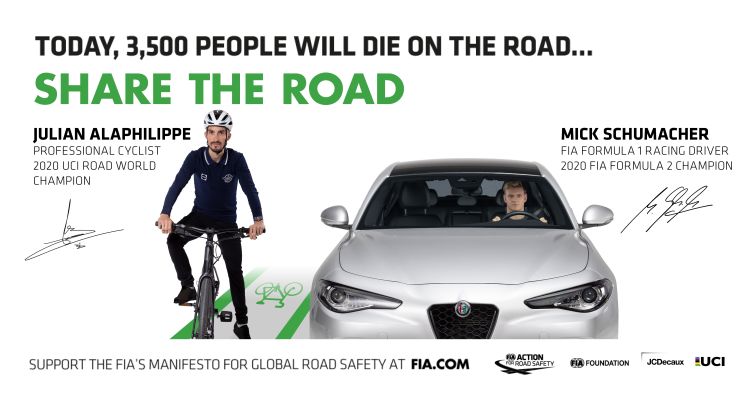 On 16 April, on the occasion of the Emilia Romagna Grand Prix, the FIA-JCDecaux #3500LIVES Global Road Safety Campaign gathered further momentum with the launch of a new visual. Bringing together FIA Formula 1 Racing Driver Mick Schumacher and 2020 UCI Road World Champion Julian Alaphilippe, this new campaign asset aims to raise awareness of the need to share the road between different types of road users.

Imola Circuit has a strong symbolic value for both Ambassadors: it is where Mick Schumacher is running his first European Formula 1 Grand Prix and it is where Julian Alaphilippe became Road World Champion in 2020, following UCI’s decision to organise the finish of the 2020 UCI Road World Championships at Imola’s renowned circuit Enzo e Dino Ferrari.

Every day, more than 3,500 people are killed on the world’s roads, including 500 children. With the aim of tackling the road safety challenge, the #3500LIVES Campaign highlights the role each and every person can play in making roads safer for all users. Since 2017, the campaign has been translated into 33 languages and displayed in over 1,200 towns and cities across more than 80 countries every year, thanks to the support of number one outdoor advertising company and campaign partner JCDecaux. The campaign’s messages will be reinforced by the new rule supported by Mick Schumacher and Julian Alaphilippe.

The FIA and UCI are working together to address the road safety challenge, particularly by promoting the #3500LIVES Road safety Campaign and raising awareness of the need to share the road between drivers, cyclists and other types of road users.

Today, pedestrians, cyclists and motorcyclists make up to 54% of all road traffic deaths while car occupants make up to 29%. The lack of dedicated infrastructure such as bicycle lanes in some countries leaves cyclists vulnerable to impact and injury. In light of the COVID-19 pandemic, more and more people have become reluctant to use public transport and are opting for alternative modes of transport: walking, cycling, motorcycling, using mopeds…thus making the need to share the road even more relevant.

By calling to ‘Share the Road’, Mick Schumacher and Julian Alaphilippe invite all road users to obey the speed limits, slow down in reduced visibility conditions, signal their intentions in advance and keep a safe distance. More specifically, they encourage drivers to be aware of bicycle paths and ensure a safe passing distance when overtaking cyclists. They also urge cyclists to wear a helmet, make sure they are visible and use bicycle paths when possible.

Jean Todt, FIA President and United Nations Secretary-General’s Special Envoy for Road Safety, said: “I am really happy that two young and promising Ambassadors like Mick and Julian have joined our FIA-JCDecaux #3500LIVES Campaign. They will help us spread our new road safety message, ‘Share the road’, symbolised by a cyclist next to a car driver. I think that, in their capacity as role models, they will be able to reach the youths who are particularly affected as road crashes are the main cause of death of 5 to 29-year olds. I also warmly thank David Lappartient and the UCI for their strong support. I am confident that all together, we will contribute to make our roads safer.”

Jean-Charles Decaux, Chairman of the Executive Board and Co-CEO of JCDecaux SA, said: “This campaign with the FIA, the result of four years of joint work, aims to promote the great cause of road safety in order to save as many lives as possible around the world and avoid the pain of the loss of a spouse, a child, a relative, a friend. We tend to talk about "road victims" as if the roads were to be blamed, whereas nine out of ten serious accidents have a human cause. Securing the road means securing more than just the road. The COVID-19 pandemic has amplified this reality: public space is shared and mobility is multiple. Raising awareness among drivers means raising awareness among all stakeholders. This new visual will complement existing campaign messages and we are very pleased to help them reach the widest possible audience through our network.”

David Lappartient, UCI President, said: “The UCI is delighted to partner with the FIA on the #3500LIVES Campaign. Ensuring that cyclists of all ages can travel safely on all roads, and understand the importance of mutual respect between all road users is of utmost importance to the UCI, especially during a time where bicycles are booming as a healthy activity and means of transport.”

Julian Alaphilippe said: “More and more people are cycling nowadays, especially in cities and that’s a very good thing. Road safety is a crucial issue and, as a professional cyclist, I think it’s important to take action. That’s why I was happy to join the #3500LIVES Campaign. I encourage all cyclists to obey the circulation rules, make sure they are visible and pay attention to other road users. I also invite drivers to be aware of bicycle paths and ensure a safe passing distance when overtaking cyclists. It’s only if we all respect the rules that we will fight road fatalities.”

Mick Schumacher said: “When I was offered to join the #3500LIVES Campaign, I did not even think about saying yes. As a professional driver, I feel like I have a responsibility to help spread the road safety message, especially among young people. In my preparation routine for my sport, I go cycling very often, so I know first-hand how important it is to share the road. Please watch out for cyclists, motorcyclists and pedestrians when driving. Together, we can save lives.” 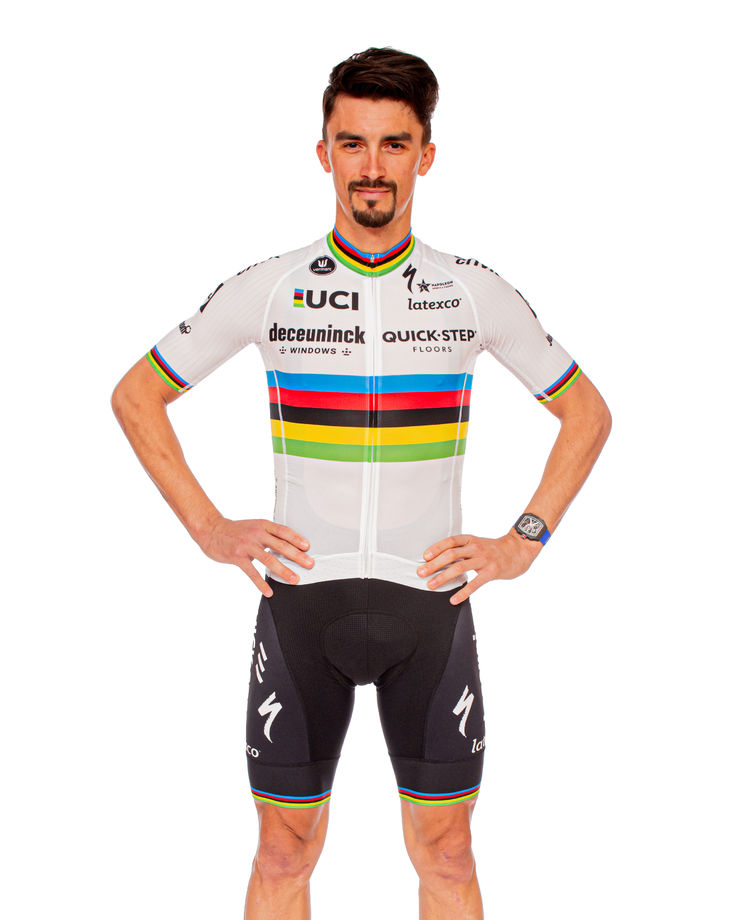